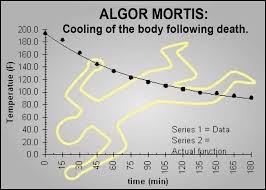 The Algor Mortis (chill of death or cooling of dead body) is a complex process, which does not occur at the same rate throughout the body. After stoppage of circulation, convectional transport of heat inside the body stops.

The postmortem rate of heat production by anaerobic glycolysis is very low. With the start of Algor Mortis, a temperature gradient develops from the surface to the core of any part of the body.

Exchange of heat between the core and surface of the body occurs only by conduction. At first heat is lost from superficial layers of the body only. Due to the low velocity of heat transport inside the body, it takes some time for heat to be conducted from the deeper layers to the more superficial layers, until finally, the temperature gradient reaches the core.

Conductive heat exchange occurs due to the temperature difference between the body and surroundings, e.g. clothing, covering, air, water, etc. At non-contact areas heat exchange occurs by convectional mechanism, which exceeds that of contact surface. Heat exchange by radiation is extensive for the first hour, but decreases later, depending on the rapid decrease in skin temperature.

Only a small fraction of heat is lost by evaporation of fluid from the skin. For about half to one hour after death, the rectal temperature falls little or not at all. (postmortem temperature plateau).

This is followed by a linear rate of cooling (between 0.5 to 1°C per hour) for the next 12 to 16 hours. Then the cooling rate is relatively uniform in its slope. Then it gradually becomes slower, and when the temperature is within about 4°C of the environment, rate of Algor Mortis cooling becomes very slow.

The human body rarely reaches the ambient (atmospheric) temperature unless the latter is at or near freezing, probably because enzyme and bacterial action starts during early decomposition.

The curve of cooling is sigmoid or inverted ‘S shaped in pattern, because of some residual enzymatic activity and due to retention of heat for some time. The body heat is mostly lost by conduction and convection.

In serious illness, circulation begins to fail before death, and hands and feet become cooler than the rest of the body; this coolness gradually extends towards the trunk. In sudden death, the Algor Mortis starts after death.

A laboratory thermometer 25 cm. long, with a range of 0 to 50°C. which can be read in single degrees is used. The rectum is the ideal place to record temperature except in cases of sodomy.

The thermometer should be inserted 8 to 10 cm. and left there for two minutes. The temperature can also be recorded by making a small opening into the peritoneal cavity and inserting the thermometer in contact with the inferior surface of the liver.

The external auditory meatus or the nasal passages also can be used to record temperature. A small electronic thermocouple with a digital readout is better.

Where the nose is used, the probe or bulb should be passed up to the cribriform plate, and in the ear, should be placed on or through the tympanic membrane. The time of this reading is recorded and temperature of environment is recorded at the same time. Reading should be made at intervals, in order to obtain the rate of fall of temperature.

A rough idea of approximate time in hours of death can be obtained by using the formula: Normal body temperature — rectal temperature

Rate of temperature fall per hour in Algor Mortis

Exercise or struggle prior to death may raise the rectal temperature up to 1.5° to 2°C. Low temperature occurs in cases of collapse, congestive cardiac failure, hypothermia, hypothyroidism, administration of muscle relaxants, cholera, secondary shock, etc.

(2) The build of the cadaver : The rate of heat loss is proportional to the weight of the body to its surface area. Thus, children and old people cool more rapidly than adults.

(3) The physique of the cadaver: Fat is a bad conductor of heat. Fat bodies goes through Algor Mortis slowly and lean bodies rapidly.

(4) The environment of the body: A body kept in a well-ventilated room will cool more rapidly than one in a closed room. Moist air is a better conductor of heat than dry air, so that Algor Mortis is more rapid in humid atmosphere than in dry atmosphere.

Cooling in water is rapid because, water is a far better conductor of heat. Algor Mortis in still water is about twice as fast as in air, and in flowing water, it is about three times as fast. Bodies cool more slowly in water containing sewage effluent or other putrefying organic material than in fresh water or sea water.

(5) Covering on or around the body: The rate of Algor Mortis is slow when the body is clothed, as clothes are bad conductors of heat. A bread spread covering may at least halve the rate of cooling.

Because of the above factors, an accurate formula cannot be devised to define rate of heat loss. The rectal temperature of an average- sized naked body reaches that of environment in about 15 to 20 hours.

If the body is exposed to a source of heat for a few hours shortly after death, its temperature will rise. A body in zero weather may undergo freezing and become stony-hard from formation of ice in cavities and blood vessels. The ice inside the skull may expand and cause separation of sutures.

Determination of temperature of the body is important only in cold and temperate climates, where more people die indoors. They are often useless in warm or tropical climate zones and outdoor deaths. In tropical zones, the postmortem fall in temperature may be minimal. It helps in the estimation of the time of death., which is not reliable.

In this condition, the temperature of the body remains raised for the first two hours or so after death. This condition of Algor Mortis occurs :

(1) when the regulation of heat production has been severely disturbed before death, as in sunstroke and in some nervous disorders,

(2) when there has been a great increase in heat production in the muscles due to convulsions, as in tetanus and strychnine poisoning, etc., and

(3) when there has been excessive bacterial activity, as in septicemic condition, cholera and other fevers.

Retrieved from "https://galnet.fandom.com/wiki/Algor_Mortis?oldid=50366"
Community content is available under CC-BY-SA unless otherwise noted.